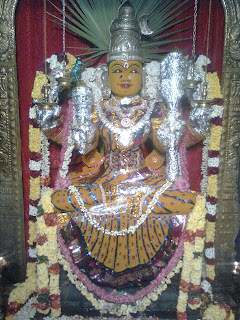 SRI NAVASAKTHI KAMAKSHI THUNAI
HOME
Shakthi is the dynamic part of the Supreme that operates.  One among those shakthi is Sri Navasakthi Kamakshi Peedam which is located in Madipakkam near Madipakkam lake. Grandiose Kamakshi deity was founded by Shri and Srimathi Radha Sethuraman (Fondly known as Radha Amma).
Radha amma was born as  4th daughter to Swaminathan and Alamelumangai in a middle class family in Keevalur village near Thiruvavoor. She was married to Mr. Sethuraman  and living in Madipakkam.  She is a staunch devotee of  Shakthi. Being a house wife, she was performing lots of pujas and aradhanas at home.  Some years ago, she undertook recital of Lalitha Sahasarananam for 48 days and during that period Ambal came in the dream of Radha amma and asked her to build a temple for Goddess Kamakshi.  Place for the temple, temple layout, image of Ambal, the wholething was exposed in her dream.
Subsequently, During the pooja on 42nd day Adi parasakthi came into her.  Upon realising the same, devotees started singing songs on shakthi devi.  On hearing the verses of  “Sri Chakra Raja …”  she felt like floating in the air and shouted at the devotees to make her sit on the floor.  Though the Devotees were frightened they managed to do so. Later amma told them “Be peaceful, be calm, there is no need to fear ” “I have just come to tell you that I have come here for your prosperity.”
After the completion of 48 days recital, one day ambal came into one of the devotee and asked Radha Amma  to visit nine thirutalas namely Kancheepuram, samayapuram, Melmaruvathoor,  Thiruvotriyur, Prathyankara devi, Vana Durga parameshwari, Angala Parameshwari, Lalithambigai and  Thiruverkadu. Accordingly Amma visited all the said 9 shrines before the construction of the temple and in view of this fact the deity was named as “Navashakthi Kamakshi Peedam”.  Mr.Sethuraman was very much instrumental in accomplishing this feet.
With the blessings of Sri Kanchi Paramacharyar Maha Shri Jayendra Saraswathi swamigal the 9 foot idol of Sri Navashakthi Kamakshi Amman kumbhabishekam held on 5.6.2009.  The distinguished factor is that the 9 feet idol is the one of the tallest Kamakshi idol in Tamil Nadu.  Sri Sarva sidhi vinayagar and sri valli deva sena samedha Sri Muthu Kumarasamy also indoctrinated here.
“Madipakkam ARULMIGHU SHRI NAVASHAKTHI KAMAKSHI PAMALAI – STHALA VARALARU “ book was released on 05-04-2009 by Mrs. T. Thanga susheela. She has written more than 100 such poems on her own.  Believe It or not, she is a house wife,  She has not written even a single poem earlier.  Each one written in this book was by an instinct.  Next volume of the same was also released on 31 January 2010 by Sri Kanchi Paramacharyar Maha Shri Jayendra Saraswathi swamigal at the temple premises.
Festivals :

Nithya Maha Deeparadhanai : 10:30 A.M. & 6:15 P.M.
Unique Specialities in Sri NavaShakthi Kamakshi Peedam :
Nine weeks Worship
It is believed that if the devotees worship ambal continuously for nine weeks in the following manner their prayers will be answered. Devotees should choose one particular day of the week (either Tuesday or Friday) and worship the Goddess on the same day for 9 consecutive weeks. Devotees should obtain a lemon from Radha amma and the same should be placed in pooja room of their house with devotion. During their next visit the same should be brought which will be replaced by a new lemon.  The same procedure should be followed for nine weeks.  Before the end of ninth week their obstacles will be removed by the prodigious kamakshi .
Sthala vriksha : Palm Tree
It is believed that the women who do not have child beget progeny if they (couple) tie a small cradle in the Palm tree.
Pournami Pooja :
It is believed that worshiping kamakshi with (maalai) for consecutive 5 pournami(Full moon day) will be blessed with desired spouse.
Navashakthi Kamakshi Trust :
Lending a helping hand to poor students for their education irrespective of their caste and creed.
Distributing food, clothing and books to the poor.
Financial aid for the marriage of poor and helpless spinsters.
Helping disabled people.
Medical camps will be conducted.
Offerings :

Contact US
The devotees who wish to donate may send their contributions by means of DD/crossed cheque in favour of CHARITABLE TRUST. Natives desires to have more information may contact the Office Administrator, phone numbers 91+044-22477599, 9940055649.
Our Bankers